No doubt you know the story of Jonah - a man who had a calling from God to go to Nineveh and preach repentance. Instead, he flees God and eventually finds himself swallowed by a great fish. From inside the fish, Jonah realizes he must turn to God, and in Jonah 2:1-2a we read:

Then Jonah prayed to the Lord his God from the fish’s belly. 2 And he said:
I cried out to the Lord because of my affliction, And He answered me...

In the remote village of San Miguel, Belize we made an unannounced visit to a man named Randy, a neighbor of one of the men of the church we were working with. Randy had recently broken his leg in a motorcycle accident and he sat helplessly on the floor in the back part of his house, his wife Lucia waiting on him hand and foot. Our arrival came as a surprise to Randy, but when it was all said and done, he told us exactly why we’d come by when we did...

A strapping, strong young man in his mid 20's, Randy lived his life fast and loose, and it was a night of alcohol and motorcycling that led to his current state of immobility.

As I began to share the Good News of the Gospel with Randy, Lucia also drew near, standing at her husband’s shoulder, listening intently. I quickly knew that she was very interested in hearing, but Randy was a little harder to read. He stared blankly downward at his broken leg and at no time gave any indication that he was remotely interested or even listening to what I had to say.

As I finished, Randy’s gaze slowly raised from the floor and he looked me directly in the eye. What he said next will stay with me forever...

" I know why you came by here today...God sent you," Randy began. "For years now, my father has been urging me to turn my life over to God, accept Jesus, but I never would. I was sitting here thinking: ‘maybe God had to get me to a place where I had no place to run before I would listen.’  Right before you walked in, I was thinking that my life was out of control, but God finally had me where He wanted me, sitting on this floor, unable to do anything but listen to Him...then you walked into my house."

The magnitude of the moment left me temporarily speechless, as Randy bowed his head in pure, genuine repentance. His eyes welled up with tears as Lucia placed a loving hand on his shoulder. Together, they began a new life as a Christian couple.

Maybe it wasn’t the belly of a fish, but the results were pretty similar: God used whatever it took to bring another one of his children home. Amen 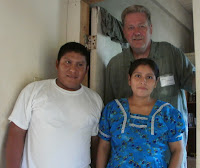 My mission partner Ryan and I paused for just a second and stared at the surreal antiquity before us. The dilapidated wooden structure, with its tin roof, looked like something straight out of the 1880's. The horse tied up in front of the house completed the look. Yet as we walked the streets that morning in Punta Gorda, Belize, this was the house we were drawn toward.

Approaching with some caution, I looked for signs of movement from within. I imagined briefly being greeted with an old double-barreled shotgun like my great-grandfather’s I had at home in a closet. But the warm smiles emerging from the house quickly alleviated any such thoughts.

Four, six, eight, and more poured out of the structure onto the old front porch, ranging from age two to around seventy. I started sharing the Gospel from the bottom of the porch steps and felt at once that the family was interested in what I was saying. They had some church background, having attended here and there, not unlike many in America.

At the end of my "mini-sermon," I invited those that fully understood the opportunity to accept Christ as their Savior, and six of the older ones did just that. I noticed the oldest of the group, a lady who appeared to be the mother and grandmother of the group, did not respond. I asked her if she had any questions, and her oldest son quickly explained she spoke only Spanish, but he was going to tell her everything I’d said.  I could tell from the look in his eye, he meant exactly what he said...

Like so many in our country, here was a family that basically knew the Gospel: that we’re all sinners, needing to repent, and only through the redemptive blood of Christ shed on Calvary’s Cross can we be forgiven of our sins...they knew all that. But they’d never made it personal. They were what I refer to as head Christians, not heart Christians, having knowledge of, but no relationship with Christ.  Over and over in Belize, I met those in the same condition. Many came to Christ, applying what they already knew to their own lives...but sadly, some chose not to.

I’ve heard it said that those are the ones that will miss heaven by a foot and a half, the distance from one’s head to one’s heart.