– Third day after the Passover

All quiet, for now. Peter’s sitting by himself again, sharpening that old sword and staring off into space. It seems so unreal. We were just having the Passover meal with Jesus...and now he’s dead. I’ve relived the events of the past few days over and over in my head, but I can’t change the outcome...Jesus is now dead.

We’ve spent the Sabbath in the shuttered darkness of this room, like cowards, in fear of being found. Mary Magdalene went to the tomb this morning to care for his body, and none of us had the courage to accompany her. He loved us so much and I feel like we’ve abandoned him.

Peter acts like he’s harboring an inner guilt beyond what the rest of us feel. At least he’d followed Jesus and saw what was going on that night. But he gets angry when we ask him what went on in the high priest’s courtyard and refuses to talk to us. He just sits there in the shadows, working that stone back and forth on the blade of that old sword.

The morning of his execution is sort of a blur now. On either side of him were two thieves being executed for their crimes. Jesus had spoken to one of them and, though I’d strained to hear, his words were absorbed by all the shouting and wailing around us. At one point, he looked down at me standing there with his mother, crippled with the unbearable pain of watching her son’s crucifixion. His eyes locked on mine, and he told me his mother was now my mother.
How typical of Jesus, to care for others, even at the height of his own suffering. 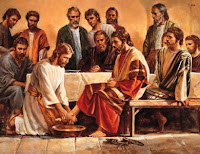 Surely I could have done something to stop this. I don’t know. But I do know that I’ve never felt so loved as I did that night, eating our meal in that borrowed upper room, listening to Jesus speak as I leaned against him. Earlier, he’d gone around the room and had a special moment with each of us as he washed our feet like a servant would. His love for us was unquestionable.

Later that night, we walked to a nearby garden area. It was a favorite spot, one where Jesus often went to pray. The rest of the men waited at the entrance, while he took Peter, James, and me inside with him. He walked on a little further by himself. I’m so ashamed that we all fell asleep, waiting for him to return.


We awoke to see Judas Iscariot leading a mob up the hillside, carrying clubs and swords. I burned with rage when I realized that Judas was the betrayer Jesus had spoken of earlier that evening. I thought of Peter and that old sword he’d been carrying. Though I’d scoffed at the notion before, I wished then I had one myself.

But Peter is a fisherman. He’s not much with a sword. One of the high priest’s men grabbed Jesus by the arm to take him away. Peter pulled his sword out and started swinging wildly. He awkwardly lunged downward at the man’s head. The man moved just enough that the only thing Peter struck was his right ear. Evidently Peter had sufficiently sharpened that old blade, because it severed the ear completely. The man bent over, crying out in shock and pain.

We stood in disbelief at what Peter had done. Even though there was another sword somewhere amongst us, there was no way we could stand up to this gang that Judas had brought to abduct Jesus, and now Peter had struck the first blow. But Jesus quickly defused the situation.

"Shall I not drink the cup which My Father has given me?"* Jesus admonished Peter. He told him to put the sword away. Then he knelt down and healed the man's ear. We were all astonished, even though we’d seen Jesus heal many before. The servant felt his ear and slowly moved his hand away. He gave Jesus a dumbfounded look as others stepped up to grab the Master and tie his hands. Fear overcame us and we all ran off into the darkness.

I’m not sure I can tolerate this painful agony much longer. The guilt of betrayal is gnawing unbearably at my gut. Jesus would never have left us this w

Mary’s at the door. Something’s happened. Will write more later.

My interpreter for the afternoon was a 21-year-old college student, Jessica. For her services as translator, Jessica was receiving school credit for the English classes in which she was enrolled. Pastor Luis had taken us to the home of a family directly across the street from his church. Only an hour or so before, I had been introduced to the church as my host church for the week. My read was the gathering was social, not evangelical in nature. From all appearances, we were there for coffee, cookies, and chit chat, and nothing more.

As an interpreter, Jessica ’ s competency was marginal, at best. I had great difficulty understanding her thickly-accented English as she translated her fellow Peruvians ’ Spanish. Likewise, she struggled with comprehending my English responses. Despite her delightful personality, and willingness to serve a Lord she ’ d only hours before accepted herself, Jessica ’ s efforts as our communications conduit made the afternoon social a fairly quiet event.

After short while, I sensed a bit of restlessness from the diminutive Pastor Luis, perched directly across from me. While he spoke not a word of English, with his head tilted somewhat to the right and his bushy, graying eyebrows slightly raised, the Pastor was definitely communicating strongly in my direction. The longer the social conversations lingered, the more urgent his body language became.

I began to reassess the situation. Perhaps this was more than an afternoon reception for a foreign missionary. Taking inventory of the family of five seated before me, I decided I should find out their spiritual situation, just to be certain.

“ Are they Christians? ” I subtly asked Jessica, leaning over to where she was sitting.

“ Yes! They are Christians, ” I heard her reply. At that point, I again went back into tea and crumpet mode. But the urgency from the Pastor Luis did not cease, but rather, seemed to increase. I began to wriggle uncomfortably in my chair, having no idea what he was trying to communicate.

Finally, his impatience with me reaching a crescendo, Pastor Luis instructed Jessica to have me tell the family about how Jesus was “ working in my life. ” So that ’ s what he wanted . . . a testimony. I began giving an account of a life fortified with Christ in hopes that it would encourage the brothers and sisters sitting before me. But Pastor Luis seemed even more annoyed and, at some point in my testimonial rambling, he snatched the conversational reigns from me.

I sat perplexed listening to Pastor Luis. While there was no denying the passion with which he spoke, I received no help from Jessica about the content of his oration toward the family, now collectively leaned forward listening to Pastor Luis. My limited Spanish began picking up key phrases and words here and there. I realized that he was sharing the gospel of Christ with this family and inviting them to receive Jesus as their Lord and Savior, the very reason I had come to Peru . . . but, thinking back to the words I ’ d heard from Jessica, “ they are Christians," just what was going on??

My confusion continued as suddenly the family bowed in prayer. Pastor Luis led them in what was obviously a prayer to received Christ. Tears were now flowing from the family members as they lifted their faces, beaming with joy from a new found Lord and Savior. Though I rejoiced in the moment, part of me still wondered what I ’ d missed.

At that point, the family surprisingly got up to leave, hugging the Pastor, Jessica, and me exuberantly as we walked them outside to their waiting car. They loaded a suitcase or two into the trunk and piled into the small vehicle. Standing on the curb, watching them speed away, I turned to my interpreter in an effort to grasp some understanding of what I ’ d just
witnessed . . .

“ Jessica, where are they going? ”

“ They go visit family now in Lima. Had to leave by two-thirty. Be gone for ten days. Pastor want speak to them today before they leave. ”

“ Yes, they did have questions. But don ’ t worry, Pastor answer them for you and now they know Jesus, just like me! ”

And with that, the dense fog in which I ’ d been immersed suddenly lifted, as five new brothers and sisters motored off into the Peruvian sunshine.
Posted by Allen at 8:11 AM 1 comment: