Jeremiah 29:11 "For I know the plans I have for you," declares the Lord, "plans to prosper you and not to harm you, plans to give you hope and a future.

I’ve seen enough "year in reviews" and "predictions for the coming year" to shake a proverbial stick at. But that’s what we tend to do at this time of year, look back and forward, simultaneously. So, if you’ll allow me, let me look back at 2012 and peek ahead at the coming year...

Teri and I celebrated 20 years of wedded bliss in 2012 by returning to Eureka Springs, Arkansas, where we’d exchanged vows in 1992. It was a wonderful trip, but there were a few reminders of the advancing years. For instance in ‘92, we rented motor scooters and zipped around the hills of Eureka Springs, hair flying in the wind. In 2012, we had the trolley car take us around town where we visited antique shops and enjoyed sitting in shady areas, eating ice cream and people watching...We excitedly found the over 100-year old stone church where we’d been married in ‘92, only to sadly find the building no longer was used as a church. Instead, a nightly magic show was housed there...we didn’t buy tickets. But like our 20 years of married life has been, the trip was a wonderful blessing. Three great kids, seven wonderful grandchildren...We look forward to the blessings of the next 20.

In 2012, we united with a new church family and praise God for leading in this matter. Stepping away from our old church was difficult, to say the least, but we never doubted God was moving us toward a new phase in our lives, church-wise, and have rejoiced in His doing so. We also cherish many memories from our old church and hold dear the many friendships we will always maintain. The past was wonderful and we expect nothing less with the future. 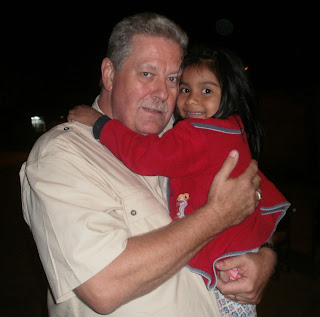 With International Commission, I made two mission trips in 2012. Going to Piura, Peru and Goiania, Brazil gave me fantastic memories that I’ll always treasure. The crusades saw over 4700 new commitments to Christ. Many of you partnered with me in prayer and financially in making these trips and, for that I can’t thank you enough. In 2013, God has led me to be involved in upcoming trips to Guatemala and Belize. Looking back at what God accomplished through the trips of 2012 excites me as I anticipate what He has in store in 2013!
This blog ended 2012 with at its highest month ever, reader-wise, and I truly appreciate all the support I received. Looking back at its beginning in June, 2011, I really didn’t know where it would lead, but dutifully followed Teri’s urging me to write. An interesting twist in 2012 is the type and number of international hits the blog gets. For instance, last year Russia surpassed Great Britain in foreign readership of Reflecting the Light. I would love to hear from someone abroad who’s been reading regularly. ((Drop me a line from way out there.))

I think it’s a good thing to sometimes step back and look at the past, as long as we don’t linger too long. Someone once said "It’s fine to look at the past, just don’t stare." I agree. But, when looking back, we should also look forward. In order to know where we’re headed, it’s sometimes necessary to see where we’ve been. In my case, I thank God for what He’s done in the past year and look forward to what He has in store in 2013.

Prayers for you and yours this coming year,

Allen
Posted by Allen at 2:58 PM No comments: