If you’re my age or older, you no doubt remember July 20, 1969. I had just turned ten years old and had been introduced to a new hero.  He didn’t score touchdowns or hit home runs. No, we didn’t have his card in a shoe box, or a poster of him on our bedroom walls. Instead, we just had this fuzzy television image of a man in a spacesuit descending a ladder. I ran outside when he’d taken his final step, one that he described as "One giant leap for mankind," and stood gazing at the full moon to see if I could somehow spot Neil Armstrong walking on the moon...

Neil Armstrong’s passing last week gave me cause to stop and reflect on the glory days of our space program of the 1960's and 70's.  I remembered something else that was pretty remarkable that occurred several months before Armstrong took his giant leap during the Apollo 11 mission. And while we might return to the moon’s surface some day, but I'm skeptical that we’ll ever see a recurrence of what happened during Apollo 8.

On Christmas Eve, 1968, Apollo 8 crew members sent magnificent pictures of our planet back to us from the perspective of the moon. I think it was the first time we’d seen the beauty of God’s creation from that vantage point. Then astronauts Frank Borman, James Lovell, and William Anders did what nowadays would be unheard of.

With the largest ever television audience at that point in history watching, the three men began to read:

"In the beginning God created the heavens and the earth..."
Genesis 1. They read the first ten verses of the Bible. Could you imagine the uproar that such an outrageous act would cause today?? The next day, they did something even more remarkable, by today’s standards...they prayed.


The forces that wrestle for control of our nation wouldn’t stand for such behavior today. The ALCU and atheists organizations would see to it that such outlandish actions never occur. The sad part is, as a society, we’ve succumbed to their pressures, and no astronaut would ever think to acknowledge a creator, let alone pray to one publicly.
The Apollo 11 mission was a demonstration of how far we’d progressed, technologically. Unfortunately, looking back on Apollo 8, we can see how far we’ve regressed, spiritually.  As we remember a true American hero, Neil Armstrong, let's also look back and repeat the prayer of Apollo 8.  The words are just as relevant today as they were in 1968:


Give us, O God, the vision which can see thy love in the world in spite of
human failure. Give us the faith to trust the goodness in spite of our
ignorance and weakness. Give us the knowledge that we may continue to
pray with understanding hearts, and show us what each one of us can do
to set forth the coming of the day of universal peace. Amen.
Apollo 8's Christmas Eve broadcast:
http://www.youtube.com/watch?v=vU5QwuYKIgQ&feature=player_detailpage#t=143s﻿
Posted by Allen at 12:32 PM No comments:

I just returned from a ten-day trip with International Commission to Piura, Peru. Actually, I’ve been back for a week, but I’ve been battling a bad summer cold all week, which pretty much sidelined me for the past seven days. But God used the past week to help me focus on some interesting aspects about my trip, and the society we live in... 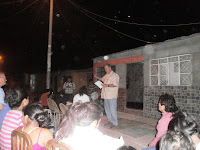 First of all, it was a fantastic trip. My good friend Donnie and I experienced God’s working in the hearts of the Peruvian people. We met and worked with true servants of God. Holding worship services in their church and in the streets of Piura, conducting home visits, and just talking to people in their neighborhoods.  We witnessed 97 people confess Christ during the week.  The entire crusade saw 2038 new Christians.  Praise God for each and every conversion! 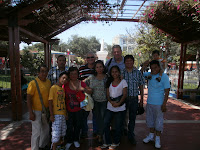 There was an undeniable Spirit of love that existed almost immediately between those brothers and sisters in Christ and us. By the end of the week, though we didn’t know each other’s language, we knew each other’s hearts, and parting was very difficult.

Sharing Christ with the lost souls of Piura came very easily. The Holy Spirit had prepared the hearts of many to hear the Word and respond. Person after person, mothers, fathers, sisters and brothers came to know Christ as their personal Lord and Savior. Again, sharing Jesus in that environment came very easy...

Last night my wife and I took in a Kansas City Royals - Texas Rangers baseball game. We especially wanted to go because it was Family and Faith night at the ballpark and several Christian ball players were to speak, including Josh Hamilton, a former MVP of the Rangers. 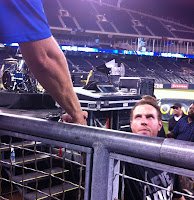 Hamilton’s story of drug and alcohol abuse is well known.  I was moved by his testimony and message. Our seats were directly in front of the steps that he descended after he spoke.  I was privileged to shake his hand and tell him I appreciated his message.

After Hamilton spoke, another speaker, Scott Dawson, gave a stirring call to the audience, asking those who’d felt moved to receive Christ as Savior to move to an empty section of the stadium, where there were counselors waiting to speak with them. Many began to make their way toward that section. But Dawson did something even bolder. He urged the Christians in the large crowd to lean over and tell the person beside them "If you’d like to walk over to that section, I’ll be glad to walk with you..."

I’d spent a week in Piura, Peru telling everyone I’d encountered about Jesus Christ, but still, I felt a feeling of hesitation overcome me about the guy who’d I’d been sitting next to all game, chatting here and there about this and that...why was that?

In Piura, Peru, I was in tune with God’s Holy Spirit, for sure. I need to be more so in my everyday walk. That’s first and foremost. But there’s an element in our society that has put shackles on the tongues of Christians everywhere. That element reared its ugly head during last week’s Chick-fil-A ordeal. A Christian CEO on a Christian Radio station and in a Christian newspaper said simply he believed in the Bible’s teachings...and there was an outcry from the Political Correctness Police.

I was proud of the turnout at Chick-fil-A last Wednesday...but it should not have been necessary.  The same cultural atmosphere that Chick-fil-A President Dan Cathy encountered by simply stating his belief in the Bible, is the same atmosphere that caused me to hesistate tapping that man's shoulder last night.  We’ve been duped into caring far, far too much of what negative response we might encounter if we share Christ with our neighbor, our coworker, our relative. Shame on us for allowing that fear and intimidation be the driving force, instead of the message we’ve been mandated to spread...

I don’t know for certain whether or not that man sitting next to me was a Christian or not. I do know a couple of things, though. He heard tremendous testimony about how Christ was working in the life of Josh Hamilton. He heard a well-presented plan of salvation from Scott Dawson.  And, though he didn’t respond to my offer, he felt me overcome my initial hesitation, tap him on the shoulder and tell him I’d be happy to walk him over to where the new believers were gathering.

Maybe it will serve as a seed and God will use another to bring him to Christ.  I pray for that.  I also pray God will continue to give me chances to tap someone on the shoulder...and the courage to do so.
Posted by Allen at 4:07 PM No comments: