When I first hired on with the Bureau of Prisons in the early 80's, I had a firearms instructor that used an expression that always stayed with me when having to go through the yearly firearms qualifications. The instructor told us the most accurate way to fire any weapon was to have a "surprise shot," achieved by not anticipating the gun going off, but rather, by focusing on the gun’s sight at the end of the barrel and maintaining a slow, steady squeeze on the weapon’s trigger until it fired. If you maintained the proper focus, the shot would come as a surprise and your accuracy would improve. Earlier this month in Guatemala, I experienced several "surprise shots," things that happened that I really wasn’t expecting...

On the hour long van ride out to a mission church, I sat in the back seat casually watching the scenery of a beautiful country pass by. Our main interpreter during the week was a 29 year old young woman who, by all appearances, seemed as ordinary as any young lady you’d want to meet. But looks can be deceiving. You see, Falon had been widowed 10 months earlier, her husband of only one year killed in a motorcycle accident. On the drive out to the mission, for the first time since the tragedy, she began tearfully unpacking how torturous the past 10 months had been, and how God had delivered her through the darkest days of her young life. 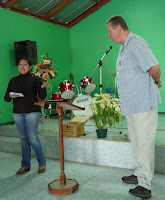 When I got up to speak that afternoon at the mission church, my topic "faith," having true faith even in the most trying times. I had an illustration from my own life that I’d planned on using, but I realized that standing next to me was a much more powerful testimony...Falon’s. Though she’d never spoken publically about any subject, I felt led to ask her to step outside her role as mere interpreter and share what she’d told me in the van that afternoon. With all the composure of much more experienced speaker, Falon gave a powerful testimony that didn’t leave a dry eye in the house...a surprise shot that hit dead center every heart in the room.

Later in the week, we were visiting an elderly lady in her home. She made a profession of faith and we rejoiced in her decision. My mission partner for the week, Keith, asked if there was anyone else in the house we could visit with. She went back in the back of the house and returned with another woman around her age, and an 18 year old young man I’ll call Juan.

We visited for a while with the woman, and she came to the same decision as the previous lady had: she, too, wanted Christ as her Savior. The whole time I was watching the body language of Juan. He seemed stereotypically teenaged in his actions, completely uninterested, seemingly desiring to be anywhere else but listening to two foreigners talk about Jesus.

But then something was said, I’m not sure what, that cracked the hard shell the young man had shielded himself with. Before long he was openly weeping about being 18, and having a father who’d abandoned the family when he was 10. We counseled with Juan and loved on him for over an hour. Normally stoic Keith wept with him over the hurt Juan had harbored all this time. Juan never committed to Christ that afternoon, but he made great strides in coming to terms with the pain that had been inflected on him and acknowledge that he did need God’s love in his life...certainly a surprise shot moment from what I’d expected from Juan.

A couple of incidents that took me by surprise occurred during visits to different classes at a Guatemalan school. One morning we were speaking to a classroom full of teenage girls. I was standing in the back of the room, listening to Keith’s testimony, trying to figure out some way to connect with the girls. God quickly provided the answer. Glancing down, I saw a magazine cutout taped to a desktop of a familiar face. It provided me with a foot in the door... 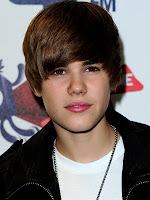 "How many of you girls know Justin Beiber?" I asked the young ladies, opening my message to them about their beliefs. Every one of the girls gleefully raised their hands, their eyes opening wide.

"Really? You know Justin Bieber??" They nodded with great enthusiasm. "Really?...when’s the last time you talked to him?" The girls broke out in laughter.

"You see, you know who Justin Bieber is, but you don’t really know him, do you..." I went on to explain that it can be the same way with our spiritual relationship. Many people know who Jesus is, know much about the Bible, etc., but don’t really know him, personally. Eight of those young women became sisters in Christ that morning...and Justin Bieber got a surprise shot assist.

Later in the week, we were talking with a group of 3rd and 4th graders. After I’d finished speaking, I found myself with about 10 or 15 minutes left in our session. Improvising, I asked if anyone had any questions about Jesus. Several hands shot up and the questions came fast and furious. I wondered what I’d gotten myself into, I must admit...

Then toward the very end of the session, a little girl on the front row meekly raised her hand. Something drew my attention to her hand, despite the others that had been frantically trying to get my attention. In a sweet, but very serious voice, Amanda asked, "Can I give my heart to Jesus right now, would it be okay?" You see, Amanda’s grandmother had been teaching her from the Bible for some time, she’d just been waiting for a chance to proclaim Christ as her Lord and Savior...a surprise shot indeed, dead on target.

The Guatemala City crusade saw 2935 professions of faith as 36 Americans on mission joined with Central and South Americans across the large city. I will remember many beautiful people that we worked alongside. The church we were assigned to witnessed 83 new Christians during the week, many via a surprise shot.
Posted by Allen at 9:37 PM 1 comment: