I've returned to Peru for another crusade with the Internatiomal Commission, and like last year's crusade, there is obvious evidence of God's work before, during, and no doubt after our visit will be over. My good friend, Donnie, and I alone have had the blessing of witnessing over 50 professions of faith in Christ in the three and half days we been here. The total crusade number is over 500 at this point, with three and a half days to go!

Last night, we held a street service, bringing chairs out into a street.  Not to worry, it wasn't that busy of a street!  Only about two or three cars a minute whizzed by. For once, I made sure I wasn't a back row Baptist. Several were witnessed to as they walked by and I know at least one made a profession of faith. 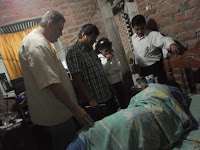 As we were getting ready to leave, a woman came up to me and asked me to come pray for her ailing mother, which I did, taking Pastor Luis and a couple other men with me. We prayed over her, asking God to ease her pain, and heal the bladder infection she suffered from. Although a rather simple thing here, any infection of the body is a serious situation here.

After we prayed and were getting ready to leave, a woman from the church whispered in my ear "she not believer, brother."  I called my interpreter back and we asked her if we could tell her about Christ. She say yes, and shortly after, became a Christian!

When we left her room, she still had the sickness that had driven her to her bed, but the ultimate sickness that has plagued man since Adam, the sickness of sin, which the Bible says ultimately leads to death, had been completely removed by the Blood of the Lamb. God used her sickness to create a situation where she could hear about Christ...wow.

Appreciate all of your continued prayers. 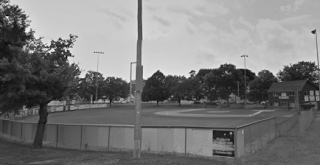 By all appearances, it was just another rather meaningless game of little league baseball in the little farm town of Arcadia, Kansas. I was 12 years old, on a team my father coached. We’d gone to the championship game the year before in the 11-13 year old league, but the bulk of that winning team had moved up to high school ball, and the remnants left behind made for a fairly mediocre team. So much so, that I was forced to do a lot of the team’s pitching, though it wasn’t my forte by any means.

I started pitching the last game of the season, a season that saw us win four or five games at best. I’d shared pitching duties with another kid all year. We had a third boy, Kent, who was 13, and pitched in a pinch. Kent loved to pitch, but was really was better suited for the outfield.

Something came over my pitching skills that night that was unexplainable. My usual wildness off the mound turned into pinpoint control. My fastball was a little faster, and the curve balls we weren’t supposed to be throwing at that tender age were actually breaking. Seemingly, the spirit of Cy Young had overcome me and I became unhittable...literally.

We played six inning games in those days, and as I walked off the mound at the end of the fifth inning, there was a buzz going about the ballpark...the visiting pitcher’s throwing a no-hitter! I hadn’t allowed a single hit all game and with only three outs to go, the pitching gem was in sight...

As I sat fidgeting in the dugout, my father came up to me on the bench and put his arm around me. I figured he was just going to encourage me, tell me not to be nervous, just keep doing what I’m doing, etc. Instead, he told me something that made a 40 year impression on my life...


Whoever walks in integrity walks securely,
but whoever takes crooked paths will be found out.

Integrity may seem like a dying art these days. We’ve come to live in a world full of mistrust, largely due to integrity’s fading presence. I wrote last week about someone stealing ice water I’d set out for the garbage collectors on a scorching hot day. Jesus said it best when he instructed:


But let your word ‘yes’ be ‘yes,’ and your ‘no’ be ‘no.’ Anything
more than this is from the evil one.  Matthew  5:37
Be honest, upright, and a person of your word...
...Dad started out with "Hey, ol’ bud." Whenever he had something important to say, it seemed like dad used that phrase..."Hey, ol’ bud. You’ve pitched a heckuva game tonight. But I gotta let Kent pitch this last inning. It’s his last game in this league, and I promised him I’d let him pitch a little tonight. He’ll probably never get to pitch in high school ball, so I gotta let him pitch tonight..."

Nobody probably would have remembered that little league no hitter I might have finished that night, but me. No one but me remembers that the first batter Kent faced hit a clean base hit up the middle to break up the no hitter. And, I imagine my dad would’ve loved seeing his son pitch a no hit game that hot Kansas night. But more important to him was keeping his word, his integrity, to Kent. Forty years later, a little league achievement is far, far less important than the major league lesson I took from that night.
Posted by Allen at 8:29 PM 2 comments:

It seems somewhat fitting that as we celebrate our country’s birthday, we also pause and reflect on the passing of Andy Griffith. Andy, Barney, Aunt Bea, Mayberry... doesn’t get much more Americana than that.
My kids used to grow weary of me watching old Andy Griffith reruns. Like many of you, I’ve seen every episode, most several times. There was a wholesome goodness about escaping for a half hour to Mayberry, North Carolina that hasn’t really ever been duplicated. Much like the town in which I was raised, in Mayberry everyone knew everyone else. Most importantly, everyone seemed to care about everyone else. I’m afraid that’s a fading aspect from today’s, what’s-in-it-for-me society.

The other day, I had some iced cold bottles of water that I was going to take on a little city exploring with my wife and our granddaughter, who was visiting for the week. As we got ready to leave, I looked out to the curb where my trash cans sat waiting for the garbage collectors to come by. I thought about the heat beating down about 103 degrees and realized those guys out on the trash route could use a cold drink more than I. So, I took an old cooler and set the water out for them, with a sign that read, "Garbage Collectors: Please take all the water." Seemed like a Mayberry-like thing to do...

A few hours later we returned to find the garbage truck had not made it to our house yet. However, someone had stopped and taken the water, the cooler, even my little handmade sign...stealing water left for the trashmen. At the risk of sounding like an old curmudgeon, what’s this world coming to.

Yesterday, a well dressed woman at Walmart was in front of me in line with quite a few items. She was talking on her cellphone and putting her items up on the conveyor belt simultaneously. She was in a world of her own. Somehow, she managed to complete her transaction, load her bags back into her shopping cart, and stay on her phone without ever making eye contact with the cashier. She started to whisk away and I noticed she’d left a bag on the counter. "Excuse me, ma’am," I said, as she continued yammering on the phone, trying to get her attention. In one motion, she whirled around, snatched the bag from my outstretched hand, and went on, never once leaving her phone conversation... 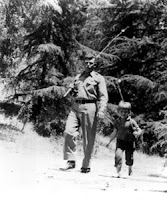 We’re probably all guilty of being a little inconsiderate of others at times. Our world is more and more on a fast pace of self-centeredness, for sure. But as we celebrate the blessings of living freely in our great country this Fourth of July, maybe it would behoove us to grab our fishing poles and walk back down that country road a ways with Andy and Opie.  I might be dreaming a little, but with just a little effort from each of us, perhaps we can recreate our own little slice of Mayberry. Thanks Andy...
Posted by Allen at 5:22 PM No comments: